Why not head out and play 9 or 18 holes on our championship Greg Norman designed golf course, then enjoy some food and drink with friends at Love the Grind Cafe, which boasts fantastic views of the Spencer Gulf. 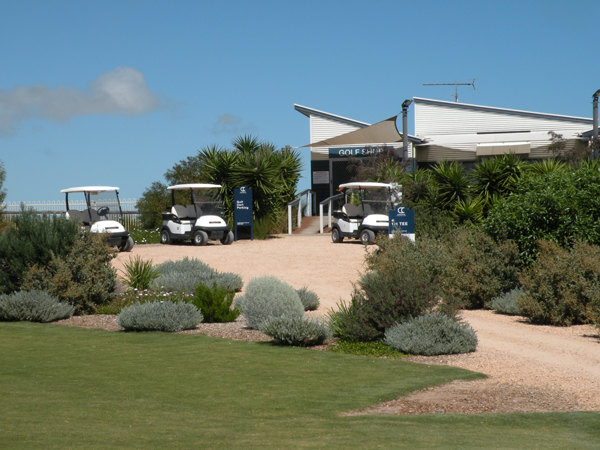 The boundary is defined by white stakes with black tops and the wire boundary fence.

2.  Provisional Ball for Ball in a Penalty Area

"If a player does not know whether his or her ball is in the red penalty areas to the left of the 2nd and 3rd fairways, the player may play a provisional ball under Rule 18.3, which is modified in this way:

Once the player has played a provisional ball under this Rule, he or she may not use any further options under Rule 17.1 in relation to the original ball.

In deciding when that provisional ball becomes the player's ball in play or if it must or may be abandoned, Rule 18.3c(2) and 18.3c(3) apply except that:

When Original Ball Is Found in Penalty Area Within Three-Minute Search Time.  The player may choose either to:

When Original Ball Is Not Found Within Three-Minute Search Time or Is Known or Virtually Certain to Be in Penalty Area.  The provisional ball becomes the player's ball in play.

Young trees and shrubs identified by stakes are no play zones

If a player’s ball lies anywhere on the course other than in a penalty area and it lies on or touches such a tree or such a tree interferes with the player’s stance or intended swing, the player must take relief without penalty under Rule 16.1f

5.  Treating Movable Objects to Be Immovable

All stakes and ropes on the course are treated as immovable obstructions from which free relief is allowed under Rule 16.1. Relief is not allowed to be taken under Rule 15.2.

Penalty for Breach of Local Rules

Unless otherwise noted, the penalty for breach of a Local Rule is the General Penalty.